“Vintage advertising — found in my mother’s basement, flea markets and various corners of the Internet — dusted off and displayed for your viewing pleasure.” 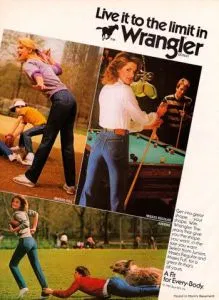 In the late 1970s there was a boom for dark wash designer denim jeans thats been with us ever since.

It’s by far my favorite tend with women’s fashion, because we go from an era even in the mid and late 1970s where women didn’t look like they were out West in the late 1800s or early 1990s wearing very long dresses and having to hold parts of their dresses when they walked, because they were worried about walking on their dresses and even tripping, but an era where women wore very baggy pants and were not expected to show off their legs at least with pants. And were bellbottoms and what were called in 1974-75 and even a little later and earlier flares. They were sort of like jeans, but not tight at all.

And then we end up in an era starting in 1978 or so with all these magazine covers, as well as movies and TV sitcoms and other TV programming where women are not only wearing jeans, but denim jeans, designer denim jeans, skin-tight designer jeans, where the jeans would go down only to the woman’s ankle so and would be real tight in the legs and hip area of the woman’s body. Where American women are now wearing jeans the way American men were wearing them on TV and in the movies since the 1950s.

Designer jeans that are simply designed to show off a woman’s legs and butt, to show off their curves and how beautiful and sexy they were physically. But in a stylish professional way where women could dress down their jeans with t-shirts and boots, or could dress their jeans up with nice jacket, blouse, as well as boots and could wear denim jeans to work or go out to dinner, go shopping and other places, or go to ballgames with their boyfriends or the movies in their designer jeans. And not look like they’re being over sexual or pornographic and have to worry about what more culturally conservative people thought about their tight pants and boots.

American women become liberated economically in the mid and late 1960s with the freedom culturally to not just go to college and get a degree, but then using that degree to get themselves a good job and enter the outside workforce and become economically independent from men. To the late 1970s and ever since where now they’re culturally liberated when it comes to fashion. Where it’s not only acceptable for them to be beautiful physically, have a beautiful body physically, but then have the freedom and courage to show the world that they have a beautiful body and are proud of it. Designer jeans from the late 1970s and early 1980s, to skinny jeans of today both denim and leather, as well as boots, are great ways for women to showcase their bodies and show people how put together physically that they are.

We go from an era in the early and mid 1970s, where American women weren’t supposed to show their legs and butts at all, really other than miniskirts and other skirts which is some cases can be more revealing for a woman’s lower body than tight denim, to an era where it was acceptable and in some cases expected for American women to not just wear tight jeans ( both leather and denim, ) but were those pants on a regular basis and in some cases everyday depending on what they did for a living and if they were involved let’s say in the fashion or entertainment business or just out running their errands and doing their everyday business like going shopping or their kids sporting events.

And it’s not just tight but skin-tight jeans especially denim but in some cases leather jeans like in entertainment and the fashion world, because not just popular but mainstream starting in 1978 or so with all sorts of American sitcoms now showing Americans women wearing skin-tight designer jeans on a regular basis and sometimes even every show with multiple women wearing designer jeans on the shows, but this movement in fashion for women just grew and grew. In the 1980s and especially 1990s, America women were seen everywhere in designer jeans and Levi’s in every possible environment on TV. Women were even seen at work in tight jeans like on cop shows, private eye shows, other action/drama shows. Like The Dukes of Hazzard, The Fall Guy and other shows. And this is a trend in women’s fashion that just keeps growing and will probably never go away.

A trend that started in 1978 that just kept going by the late 1990s-early 2000s, the dark wash skin-tight designer denim jeans that women started wearing and loving in the late 1970s, came back into style. Didn’t replace the Levi’s and Guess Jeans from the 1990s, but became an addition. Where you started seeing women in 1997-98 and into the early 2000s, wearing designer jeans that looked like they could be from 1979-80. But were perhaps even tighter and were more low-rise. Studded belts became mainstream on America women in the early 2000s and weren’t before that when only biker women and rocker women would wear studded belts for the most part. And you would see women wearing their studded belts with their low-rise designer jeans on a regular basis and everywhere.

We’re now in a skinny jeans era ( if you can call 8 years and era ) that started in 2005 where women not only wear skin-tight low-rise designer denim jeans, but can wear them in a way that shows off their butt and legs perfectly ( if they have nice legs and a nice butt ) but can do that in a way that doesn’t give away too much. The low-rider ass crack jeans ( as I call them ) that were popular in 2001-02 were replaced by skinny jeans that are still low-rise and skin-tight, but where women can sit down and stand up without showing off skin around their backside. And this is an era for denim jeans for women that will be around forever I believe, as long as sexy women are comfortable in them, like them, and enjoy showing off their legs and butts.

Mexican sports TV journalist Ines Sainz. Too freakin cute and very sexy.
Like the black leather jeans.
Baby Girl, how are you? Is what I would ask Jayne Mansfield, if I saw her when this photo was taken. Literally one of the cutest women, top 1%, whose ever lived on Planet Earth.
American Badass Pamela Grier. She's also a Hollywood Goddess, because yes, she's tall, with the perfect body, and absolutely beautiful, but she's also one of the best action/comedy stars in the history of Hollywood. Sort of like the female version of Burt Reynolds and Clint Eastwood. And yet absolutely adorable which plays into her badass, because you wouldn't think a woman who looks this sweet, could be so bad. At least not back in the 1970s.
The Lizard King Jim Morrison, an American original.
Damn, I hope ABC brings Angelique Cabral back to Big Sky next season. But sounds like character is moving back to Houston, Texas. Which isn't exactly a cab ride away from Helena, Montana.