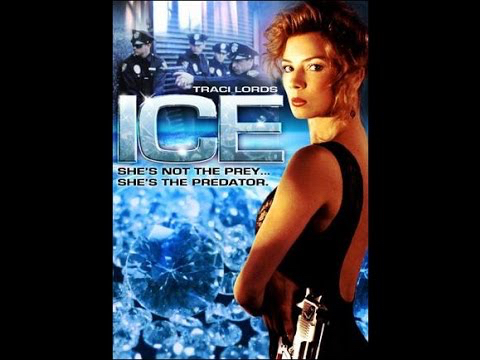 Even with Traci’s gorgeous, baby face, she plays a bad girl in Ice. Ellen Reed ( played by Traci Lords ) and her husband Charley Reed ( played by Phillip Troy ) are cat burglars sho steel diamonds from the mafia and the local police detectives are on to them to try to catch them. This is really not a movie about bad guys and girls versus good guys and girls, but more like a movie about dancing with the devil that you know the best with the mafia being the worst devils in this case and the cops trying to use the Reeds’s to help them bring down the local mafia there. Not that different from how the FBI an U.S. Attorney’s use informants and ex-mobsters to help them bring down the mafia in New York and other big cities in America.

The plot alone I believe makes Ice a very interesting movie. But it’s a cheap film like most b-movies and unlike Intent To Kill that did have other stars in it including Traci Lords with Scott Patterson and Yaphet Koto, I don’t believe unless you’re some Hollywood movie historian and junkie, I don’t believe that you would recognize anyone else in this movie other than Traci Lords. But considering that Ice is a movie with a lot of perhaps c-actors and not even b-actors and that Traci at this point at least is probably just a b-actress at this point, Ice is a very watchable and entertaining film. Especially considering what they had to to work with. Sort of like an NFL team that wins 9 or 10 games without any stars on the team, Ice is a good film especially considering what it had to work with.

The gorgeous blonde might be Heather Locklear who dated headbangers in the 1980s. Got me on who the guy is.
Kelly Bundy (played by Christina Applegate) might be the sexiest TV rocker chick of the 1980s.
Mexican sports journalist Ines Saint in Los Angeles. With all the photos of her online you would think that she’s a professional model or entertainer. She also works a lot in America covering sports events here.
Hollywood Babydoll Jennifer Aniston I believe at the airport. I’m sure she had a lot of admirers there.
This is from The Doors Love Me Two Times music video from 1968. This photo of Jim Morrison was shot at Santa Monica Beach for that video. Only The Lizard King would wear skin-tight, black, leather jeans at the beach and desert. He was truly an individual.
Two Leather Babes perhaps from the Leathered Life website that’s based in Germany. Love them in their Miss Sixty leather jeans.